And the least feminist nation in the world is… Denmark? 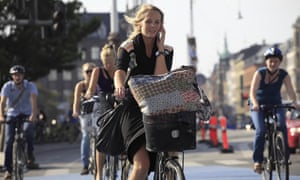 A poll found that only a quarter of Danish women consider themselves feminists. Photograph: Bruce yuanyue Bi / Alamy/Alamy

A poll of more than 25,000 people in 23 major countries found that just one in six Danes consider themselves a feminist.

It is one of the best places in the world to be a woman, with a narrow gender pay gap, equal employment rights, universal nursery care, and some of the happiest female retirees on the planet.

So it comes as a surprise to find, in a global survey of attitudes towards gender, equal rights and the #MeToo movement, that Denmark is one of the least feminist countries in the developed world.

The poll, conducted by the YouGov-Cambridge Globalism Project of more than 25,000 people in 23 major countries, found that just one in six Danes consider themselves a feminist, a third said that wolf whistling at women in the street was acceptable, and two in five had an unfavourable view of the #MeToo movement.

“It’s a difficult question. What is a modern feminist?” muses Helene Frost Hansen, a 37-year-old accountant, as she bites into her sandwich outside her office on Copenhagen’s City Hall Square. “I don’t want to be equal in all senses.”

“It depends what you mean. I’m just ordinary, says Charlotte Venvike, a 55-year-old taking her break from the bank where she works. “I’m not marching in the streets.”

According to the data, only a quarter of Danish women consider themselves feminists, a stark contrast to neighbouring Sweden, where 46% do, and a smaller share even than in countries like Italy, Spain and the UK, which otherwise lag far behind Denmark on gender equality.

Even Denmark’s Equality Minister Karen Ellemann declared that she didn’t consider herself one when she took up the post three years ago.

Of a dozen women approached in the Danish capital, only one had time for the f-word.

“Yes, and I had three daughters and raised them all as feminists,” says Charlotte Mathiesen. “The man has to do exactly the same jobs as the women.” 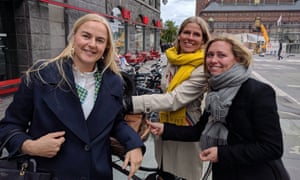 Charlotte Mathiesen, middle – with Julie Nygård, right, and Rikke kvist Wulff – is in the minority of Danish women who consider themselves a feminist. Photograph: Richard Orange/The Guardian

In fact, more Danish women are happy to be wolf whistled than called a feminist, according to the survey. Fully one third say it is acceptable, the highest proportion than in any country other than Nigeria.

“I don’t mind it so long as it’s done in a nice way,” says Hansen. “I see it as a compliment, actually,” she says. “A lot of Danish women say that they would like men to to be more like in southern Europe and tell you how nice you look”.

Rikke Andreassen, Professor of Communication Studies at Roskilde University argues that one reason Danes tolerate low-level sexual harassment is the belief that what is meant well should be excused.

“We have had a culture where what you say isn’t racist or sexist if you don’t intend it to be,” she explains. “You can grab a woman, but so long as you did it because it was ‘fun’, then culturally we tend to think it’s not that bad.”

This may be part of the reason the debate triggered by the #MeToo movement has played out so differently in Denmark than it has across the Öresund Straits in Sweden.

Only 4% of men and 8% of women in Denmark questioned in the survey said they had a ‘very favourable’ impression of the #MeToo movement, compared to 16% and 34% in Sweden, and 19% and 24% across all the countries in the survey.

Sara Pihl, 32, who is out walking her baby on the nearby Kultorvet Square, worries that #MeToo will make men feel constrained in their relationships with women. “I think some men are afraid of talking to women at work, in case they get accused of something.”

Andreassen’s research on the #MeToo movement has found that while in Sweden the media treated it as a political issue, in Denmark it was covered in the culture and opinion sections of the newspapers, with very few men outed.

She suspects the resistance to seeing harassment as a problem might also reflect the way politicians in Denmark have argued abuse of women is only an issue among the country’s Muslims.

“But there’s another reason that you probably shouldn’t quote me on,” she laughs. “Maybe my country is just really misogynist.”